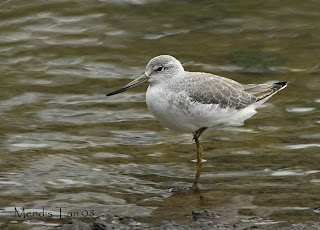 A Gap of 27 Years in Singapore

It has been a historical moment for many birdwatchers in Singapore when 2 Nordmann's Greeshanks turned up unexpectedly at Sungei Buloh Wetlend Reserve on 15 Nov 2008 - after 27 years since it was last reported in Singapore (Nature Society Singapore).

The bird was first discovered by Tan Kok Hui, Danny Lau and Lau Jia Sheng and Tan Gim Cheong. Soon afterwards the ID was confirmed by David Li who has previous experience with the species in Malaysia.

The event coincided with a very high tide in the noon where most mudflats around Singapore and Johor had been flooded and many shorebirds were forced to retreat to few remaining wetlands still not submerged such as Sungei Buloh Wetlend Reserve.

Nordmann's Greenshank is an Endangered species according to BirdLife International where its migratory routes are confined to East Asian Australasian Flyway. Its global population is very low and is estimated at less than 1000 individuals. There has been many encouraging sighting of Nordmann's Greenshanks lately, many from the sites where this species was never officially reported previously, such as Sumatra, Java and NW Australia. 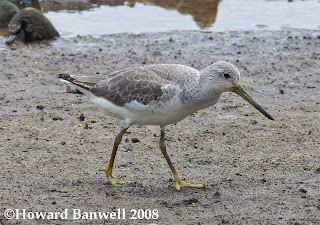 RIGHT: One of two Nordmann's Greenshank found strutting on the muds in Singapore. An inconspicuous rarity that has caused much excitement among local and international birdwatchers. (Photo Copyright: Howard Banwell 2008)

However, this sighting in Singapore is signficant and unique because the birds were located within a nature reserve and have been observed feeding actively on the site. The combination of easy accessibility with hides as well as good number of local experienced birdwathcers and photographers mean that this is a rare opportunity to better study Nordmann's Greenshank's feeding and movement behaviour. 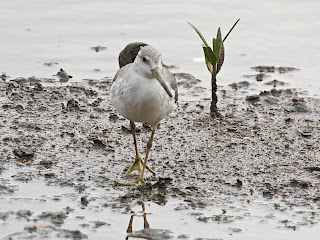 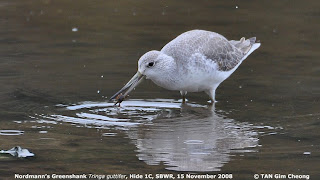 RIGHT: A Nordmann's Greenshank feeding on a crab. If you know the species of the crab, pls let me know copsychus at gmail dot com
(Photo Copyright: TAN Gim Cheong)


Well done to those who had discovered this little known and easily overlooked shorebird!!
Hope the birds will hang around a bit longer so that every birder in Singapore or visiting international birder will have a Christmas Gift!!
Posted by tippytommi at 12:25 PM 5 comments: 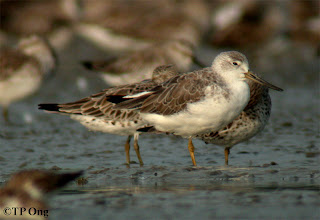 This year is again my anual rendezvous with the Nordmann's Greenshank at Kapar Ash Pond, Selangor, Malaysia.

On 12 Feb 2008, I counted at least 30 Nordmann's Greenshanks. It is my personal highest count so far. It seems that this site is attracting more of this rarity shorebird.

Possible explanations to the increase of number counted each year are:

1) The number of Nordmann's Greenshank has genuinely increased. This has to be supported by consistent increase in numbers at its breeding sites as well as other non-breeding sites along its flyway, which I do not have at the moment.

2) There are reclamation or deterioration of other nearby roosting sites and shorebirds are now more concentrated in Kapar Ash Ponds which is a protected Ramsar site.

If you have any data or observations that either support or contradict to my hypothesis, feel free to contact me at tunpin dot ong at gmail dot com.

A Rare Close Up Look 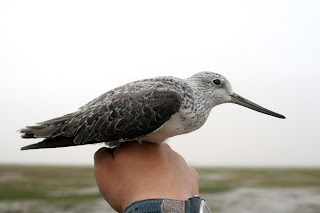 The birds were on their spring northwards trip to the breeding ground. Photos have shown that the bird has assumed partial breeding plumage. The heavily spotted breast and head as well as dark upper parts with white notches are the characteristics of breeding plumage.
If you have any further comments/inputs on its plumage, feel free to write to myself (copsychus at yahoo dot com) or Adrian (adrianboyle at westnet dot com dot au) 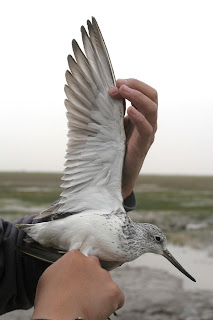 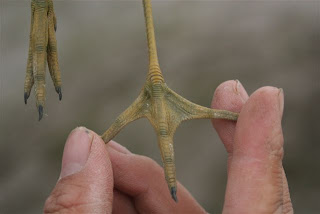 This is the legendary web that many would love to see it in the field. Nordmann's Greenshank is quite unique among Tringa sandpipers in having partial toe-webbing especially the outer toe (left photo).
^
^ 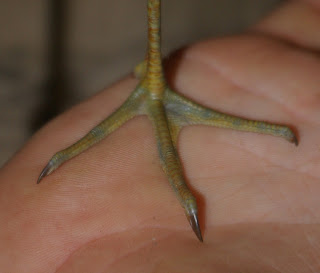 In contrast with the Common Greenshank (right photo, courtesy of Adrian Boyle and al) the web is significantly reduced in the outer toe(right) and almost webless in the inner toe (left). 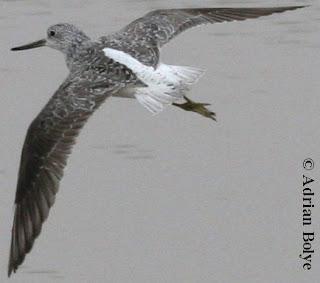 Nordmann's Greenshank released after ringing
^
^
^
^
^
^
Special acknowledgements: Many thanks to Adrian Bolye who has kindly permitted the use of the photos.
Posted by tippytommi at 11:07 PM 1 comment: 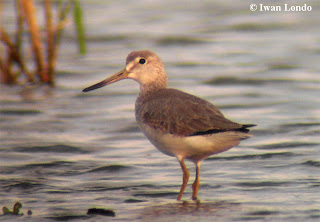 There were at least 3 spectacular sightings in season 2006/2007 which is worth noting:

1) First ever record in Java, Indonesia - 1 November 2006
Photographed by Iwan Londo at Delta of Kulon Progo River, Jogyakarta (Central Java), Indonesia. This is the first confirmed record in Java. 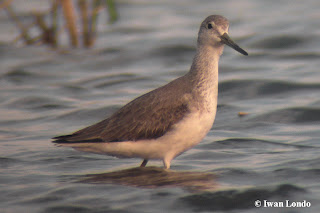 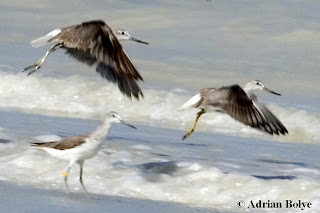 
3) Sighting of at least 70 Nordmann's Greenshanks in west coast of Peninsular Malaysia - 3 Feb 2007.
Recorded by David Li of Wetlands International near Sekinchan town, Selangor State, Malaysia. This is the largest number recorded in Malaysia, or probably anywhere in its wintering site. 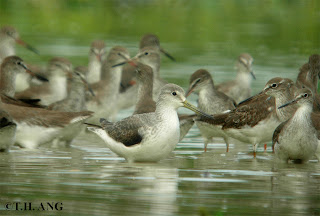 A contact from Malaysia, Mr TH Ang, had sighted 3 Nordmann's Greenshanks near Muar in November 2007. This is a migratory bird roosting site not previously surveyed by birdwatchers. (Muar is a coastal town in Peninsular Malaysia situated between Kuala Lumpur and Singapore.) 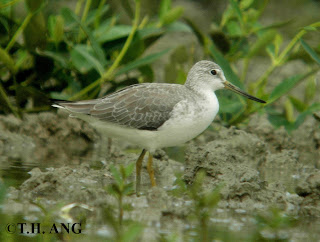 
Thanks to the extensive coverage of local birdwatchers, this elusive wader is gradually unfolded in Malaysia.
Posted by tippytommi at 11:57 PM 2 comments: 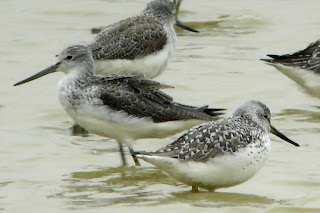 You need a different set of eyes to look for Nordmann's Greenshank in breeding plumage. This is a rare photo that puts both closely resembled Greenshank species side by side for comparison. The Nordmann's (now can be conveniently called Spotted) Greenshank on the right shows very distinct bold black dots and broad white fringed tertials. 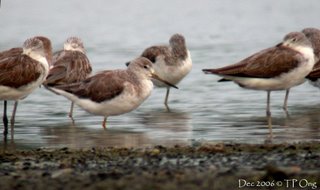 I managed to obtain a permit to visit Kapar Power Station Ash Ponds, Selangor, Malaysia to conduct survey on waders, particularly on my two main targets - Nordmann's Greenshank and Spoon-billed Sandpiper.
Kapar proves to be a very reliable site for NG. However, we did not manage to spot any Spoon-billed Sandpiper despite scanning thru > 300 Red-necked Stints. (The only official record of SPS in Kapar was a single bird in early 2002)


Kapar is only 1 hour expressway drive from KL. The highlights from 2 days survey on 26 Dec and 27 Dec 2006 during morning high tide are as following:-

Ruff - single bird among black-tailed godwits. Orange leg (easily confused with Redshank), short bill and big eyes. Too bad I did not have enough time to ascertain its gender. 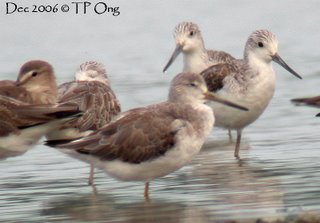 Compare the head-bill pattern and unspotted plumage of the Nordmann's Greenshank (Centre) with Common Greenshanks (behind and left). The brown-headed wader in the far left is a Black-tailed Godwit

Day Two 27/12/2006
Nordmann's Greenshank - About 15 birds - 13 birds counted side by side among a large group of waders. There were a few individuals with more prominent white eyebrow. Could this be first wintering juveniles?

Common Redshank - strangely the most abundant wader in Kapar was very few (~20) on this date. Other common birds observed are:-