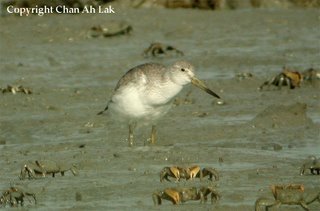 An Endangered Bird Under Siege?

A juvenile Nordmann's Greenshank (Tringa guttifer) was spotted feeding on the soft coastal mud among the 'ferocious' crabs. It should be able to get out from such natural hostile environmet. But will it cope up with loss of habitat caused by uncontrolled modern development?
(Photo courtesy of Dr AL Chan, taken 17 Nov 2002 Kuala Gula, Perak, Malaysia. The first ever sighting record at the site.)

After reclamation of Saemungeum in South Korea in April 2006, an important staging site for many migratory birds, there will be negative impacts to migratory birds that winter in South East Asia and as far as Australia and New Zealand. Normann's Greenshank as an endangered species with estimated total global population of only 500-1000 individuals (less than Orang-utans and tigers!) should be rigorously studied and closely monitored to ensure its future survival. Other threats include conversion of coastal wetlands along its flyway in South Asia and South East Asia. 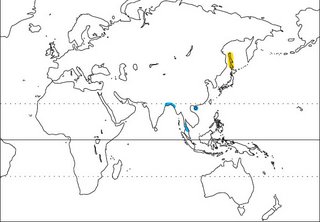 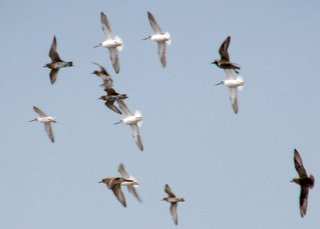 Left - A rare shot of Nordmann's Greenshank in flight, 29 March 2005, Bagan Tambang, Penang. A high count of 28 birds where 6 birds can be seen here together with Pacific Golden Plovers.(Courtesy and Copyright of David Bakewell) 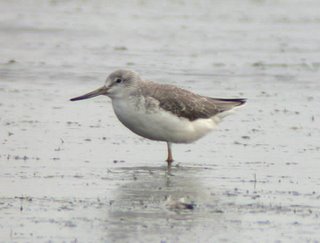 Thailand - a well known wintering site
On the right is a photo taken in inner Gulf of Thailand. (Photo courtesy by Peter Ericsson, follow link to view his other bird photos, mostly from Thailand)

Inner Gulf of Thailand is also another important wintering sites for migratory birds including this Nordmann's Greenshank.


Thanks to supports from Nial Moores/Birds Korea and Taej Mundkur/Wetlands International, I now have more details to share. I also start to approach a few photographers from different countries to get their permissions to post more photos and information. Please come back later to check on the progress. 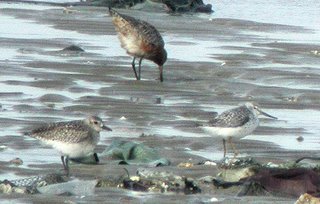 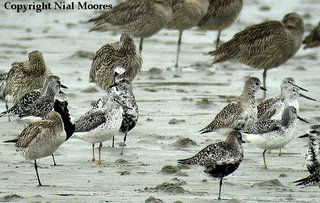 Latest photo from Nial Moores (From BirdsKorea) taken April 26, 2006, at the Geum estuary, next to Saemungeam. Even the future of this site is not optimistic after the damage of Saemungeum. (There are 4 Nordmann's Greenshanks in the photo, one in the middle left and 3 in far right. Other shorebirds are Grey Plovers and Far Eastern Curlews) 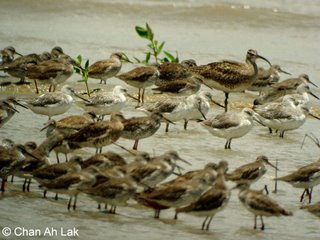 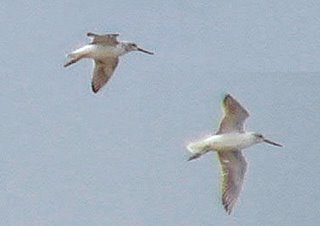 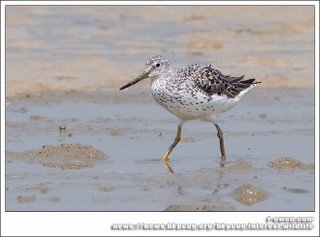 Nordmann's Greenshanks are found reliably only in a few sites along the East Asian-Australasian Flyway. Even fewer are the sites that have protected status - these include Mai Po Wetlands Reserve in Hong Kong and Kapar Ash Ponds in Malaysia.


Nordmann's Greenshank assuming breeding plumage foraging in one of its popular stop over in Hong Kong en route to eastern Russia - Not at Lantau International Airport but at nearby Mai Po wetlands reserve. Photographed on 19/04/06. Courtesy of Owen Chiang.
Posted by tippytommi at 10:11 PM No comments: