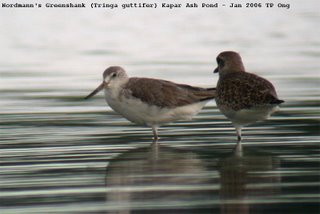 Normann's Greenshank with a Grey Plover at Kapar Ash Pond, its 'best friend' in Kapar

The Spotted or Nordmann's Greenshank (Tringa guttifer) is a very rare wader confined to East Asian - Australasian Flyway. It breeds very sparsely along the coast of eastern Siberia and winters in small number in several countries in South East Asia. The total global population is estimated at about 500-1,000 individuals (Source: Waterbird Population Estimate 3rd Edition, 2002 ). The Nordmann's Greenshank is currently categorised as globally Endangered according to BirdLife International, due to its low number, threats to its wintering and breeding grounds.

In Malaysia, one of its wintering ranges, this little brown shorebird is better known as Nordmann's Greenshank because it is in fact among the least spotted wader in non-breeding plumage. Therefore 'Spotted' Greenshank appears to be very misleading to its observers in Southeast Asia.
The photo in the right proves to be very challenging w 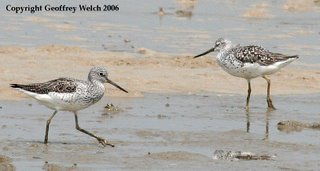 hen the Nordmann's Greenshank assumes partial breeding plumage. Photographed by Geoff Welch on 19 April 2006 at Mai Po, when the greenshank stopped over in Hongkong on its returning trip back to the breeding ground in eastern Russia. At this stage it is as equally spotted as the Common Greenshank. The few differentiating features are broad white notches at the edge of upperpart feathers, giving a broad white v-shaped edge. The bill is supposed to be thicker and blunter but it is not obvious in this photo. Yellow base of bill is often useful only in wintering gound in Southeast Asia and not in this case. Fortunately the shorter upper thigh is evident when comparing with a Common Greenshank next to it. (For those who is lost in the long-winded explanation and demand only the answer - Nordmann's Greenshak in the right and Common Greenshank in the left.)
Following are some accounts of my personal sightings of Nordmann's Greenshank on a particular site in Malaysia since late 2002.

This elusive wader has been reported in Kapar Power Stations annually, albeit in small number, usually not more than 10 individuals, with declining trends from 80's to 90's. My first sighting of Nordmann's Greenshank was on 24 Nov 2002 at small ash pond of Kapar Power Station, Selangor, Malaysia. See my first photo from Oriental Bird Club. Ever since that, I had been having rendezvous with this enigmatic shorebird almost fortnightly without failure between February 2003 and April 2003. 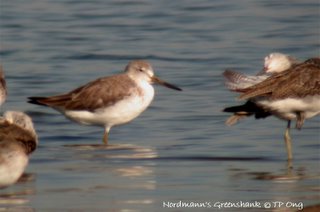 This is my first decent photo taken on 13 November 2003. On the right is the closely resembled Common Greenshank(Tringa nebularia). Note the subtle differences in the upperpart plumage. Nordmann is very 'plain' and has two-toned bill. The yellow base of bill is a key feature to rule out Common Greenshank. However this feature of yellow base of bill is not always obvious in partial breeding or breeding plumage. [Sometimes I wonder how the ornithologists managed to conclude that the little plain brown bird in Malaysia and the strongly spotted shorebird in coastal eastern Siberia are actually the same species. That must have gone through a lot of research and cross-examinations of specimens.] 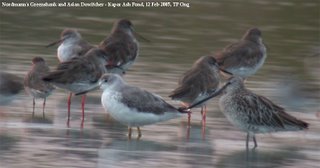 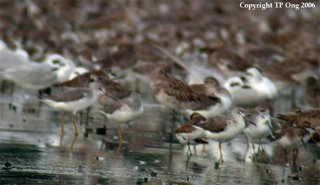 Nordmann's Greenshanks roost in 'sea' of shorebirds on 03 Jan 2006. At least 14 Nordmann's Greenshanks were counted by one 'scan' of spotting scope along horizon. The middle taller bird could be a sleeping Asian Dowitcher. Can you spot 4 Nordmanns in the frame? There could possibly be another 5th bird at the right of the tall bird. What other shorebirds can you identify?

In Kapar, the Nordmann's Greenshanks are often found roosting prominently at the edge of large group of shorebirds. That makes it easier to spot these VIP members on the 'VIP' stands. Its preference to stand on deeper water and softer mud might explain why it has partial webs on feet, which is unusual among Scolopacidae sandpipers. Based on my past observations at Kapar, the Nordmann's Greenshank usually associates with other similar sized waders such as Grey Plover, Common Redshank, Curlew Sandpiper, Great Knot, Asian Dowitcher, Black-tailed Godwit. Although the very similar Common Greenshanks are also found roosting at the same pond, the Nordmann's Greenshank rarely mingles with its close cousin. Nordmann's also rarely stand on dry ground (I have seen only once so far) 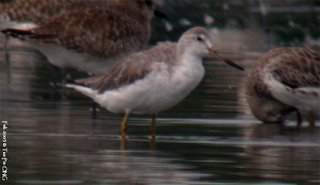 A small number of Nordmann's Greenshanks roost among few thousands shorebirds in Kapar Big Ash Pond on 12 February 2005. I also showed the birds to 2 other friends who had seen the bird for the first time. 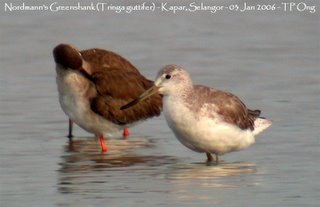 It is amazing that a very spotty shorebird in east Russia is actually the very same bird in Malaysia, albeit in much plainer plumage. It must have taken scientists lots of efforts to reconcile two different looking birds and concluded it as the same bird species.

The best time to look out for this greenshank is 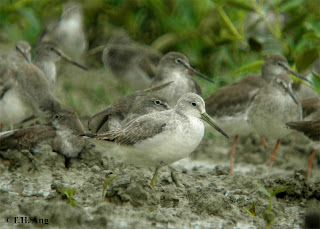 during highest tide, where a large number of shorebirds congregates in the Ash Ponds.

The optimal wader watching time in Kapar Ash Pond can be very brief, often between 7:30am - 9:30am. There is a high probability that the bird would have dispersed to coastal mudflats before one could locate a Nordmann's Greenshank.

My latest sighting on 03 Jan 2006 was a significant milestone as I had counted at least 14 Nordmann's Greenshanks - my highest record and also one of the highest at Kapar in recent years. It was not easy to organise this visit as my trip to Malaysia was only a week and I had to communicate with the Kapar management via emails and phone many times in order to secure a special visit permit. [Note: Kapar Ash Ponds, although designated as a East Asian-Australasian Shorebird Site Network, is a highly restricted premise, permit must be obtained in advance and photo ID (Passport or driving license) must be surrendered at the security entrance] 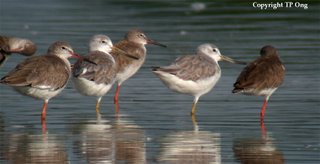 Most shorebirds found in Malaysia are very timid and get spooked easily. Being a highly restricted area, the Kapar Ash Ponds have become a safe roosting haven for a large number of shorebirds. Among them are small number of endangered Nordmann's Greenshank (2 yellow-legged birds in the pic) and Spoon-billed Sandpiper. 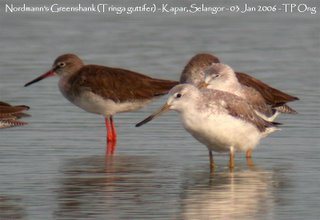 Although the sightings of Nordmann's Greenshank in Malaysia have been encouraging in these few years, we still cannot safely conclude that the population of Nordmann's Greenshank has increased. It could be partly because of increase in birdwatcher surveys. There is so little we know about this bird such as its movement, site fidelity, specific ecology requirement, etc.

The Future is Bleak

The future of Nordmnn's Greenshank is not optimistic, compounded by recent reclamation of Saemangeum estuary, South Korea, an important staging site along its migration route.

The impact of this reclaimation, along with development of coastal wetlands in Asia will have enormous impacts on migratory birds in long term.

See photos on how disastrous it will pose to the migratory birds in next few years. 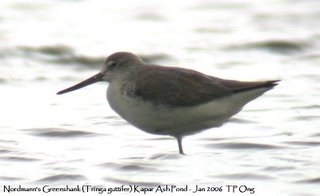 A lonely Nordmann , just before leaving the ash pond when the tide receded in nearby mudflats.

Although my knowledge of birds is still amateur and my photos are not so great, I still hope I will be able to help generate some awareness and interests in its conservation. This unattractive wader deserves high attention due to its endangered status and its dependancy on ever diminishing coastal wetlands. Often the conservation of migratory birds requires efforts from across the nations. What I could do is to keep reminding the general public the significance of many unsightly places in Malaysia such as Kapar Ash Ponds or any muddy coastal mud along Peninsular Malaysia that actually house some globally endangered birds. They are so hard to detect until some may doubt if it ever exists. Well, it does exist - the photos are the living proofs.

1) All photos on this page are the copyrights of the respective photographers. Please seek the photographer's permission for use of any of the photos.

3) Access to Kapar Ash Ponds Station is strictly regulated by permit obtained prior to visit.

4) Shorebird surveys are regularly conducted by Malaysian Nature Society. Birdwatchers are encouraged to take part in the survey on designated time slot, often coincide with highest tide line.
Acknowledgements:
1) Special Thanks to Kapar Power Station's management for granting me access to conduct shorebird survey on 03 Jan 2006.
2) Special thanks to Swee Seng from Malaysian Nature Society for facilitating the visit permit and providing valuable information on tide table.
3) Thanks to those who either contribute in form of photos or advices and supports.
4) Any suggestions/questions/comments please write to me with email given below:

Disclaimer
This is my personal blog and I do not obtain any commercial benefits from posting this site. All informations are presented to the best of my knowledge. My apology if any soure of information is not correctly or fully acknowledged.
Posted by tippytommi at 12:34 AM 6 comments: